Abuja APC Giant Broom: We didn't do it says APC 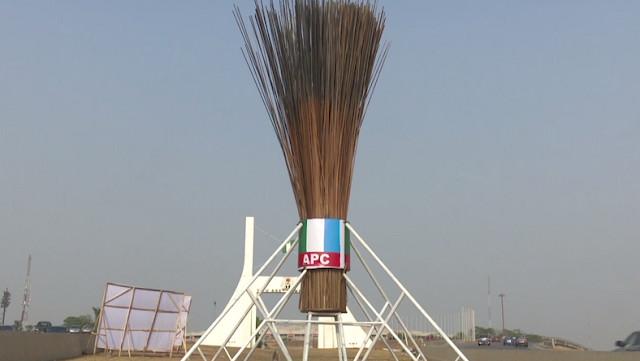 Following the widespread outcry on social media and other media concerning the erection of an enormous broom statue close to the FCT Abuja City gate, the leadership of the All Progressive Congress who the broom represent have come out to deny involvement in the erection of the statue.

In a exclusive interview with Channels TV, the APC media secretary, Mallam Lanre Isa-Orlu said the party was not responsible for it but that it was built by Nigerians who love the party’s administration of the country. He also reacted by saying the opposition party, the People Democratic Party (PDP) can build their own if they want to.
Following the citing of the Giant APC broom this month, the picture went viral with Nigerians throwing shades on the leading party. Social media outcries and memes include shaming Nigeria for deciding to erect the tallest broom in the world while other countries like Dubai erect the tallest building and other historical monuments in the world.