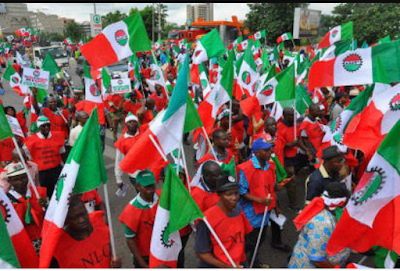 The Nigerian Labour Congress (NLC), Trade Union Congress (TUC) and United Labour Congress (ULC) have called off the planned nationwide strike just hours before it was made to begin.
The industrial action was scheduled to commence 12am on Tuesday.
The suspension was announced Monday night in Abuja after a closed door meeting of the Tripartite Committee on new minimum wage.

NLC President, Ayuba Wabba, explained that the decision was reached after agreements and documents were signed.
“Having reached this position and agreements signed, the proposed strike action is hereby suspended,” he said.
Wabba, however, refused to disclose the exact figure agreed by the committee.
He noted that the amount would only be made public after presentation of the report to President Muhammadu Buhari later in day at 4:15pm.
DAILY POST gathered that the federal government eventually agreed to labour’s demand of N30,000 after union leaders made it clear that anything below that would lead to national shutdown.
Chairman of the Tripartite Committee, Ama Pepple, expressed her excitement that their assignment had been concluded.
“I am happy to report to you that we have concluded our assignment and we will submit our report to the President by 4.15pm on Tuesday.
“We will reveal the figure at the presentation,” she assured.
Minister of Labour, Chris Ngige, also said a mutual agreement on the new minimum wage would be made public after a meeting with the president.
Secretary to the Government of the Federation, Boss Mustapha, hailed the resolution of the matter by all parties involved.
He added that overriding interest of Nigerians prevailed at the meeting.

By Anaturuchi Green July 13, 2017
BISCUIT BONE vs BRISKET  BONE; the correct one goes to.... I understand this is trending on social media that "It is brisket bone not biscuit bone"  and almost everyone including many graduates and educated  people see it as correct. But it is a wrong "correction".
2 comments
Read More

By Anaturuchi Green August 10, 2017
A large animal needs a large tool. The elephant really has it. Observers even claim that the elephant can use his penis to support himself where his feet might not be able to do so. He can also use the large penis to chase of insects from areas where the nose can't get to. Now you know!  Daily Nigerian News, African News, World News, Celebrity Gists, Fashion, Lifestyle, and Entertainment on GistGate.com Let's Chat on FACEBOOK or INSTAGRAM
126 comments
Read More

By Anaturuchi Green May 09, 2015
18 year old lady, Adrianne from Michigan is set to break the record for the longest tongue in the world with her 4 inch long tongue. She can can touch her nose, chin, elbow and even eyes with her tongue. See more pics below.
63 comments
Read More