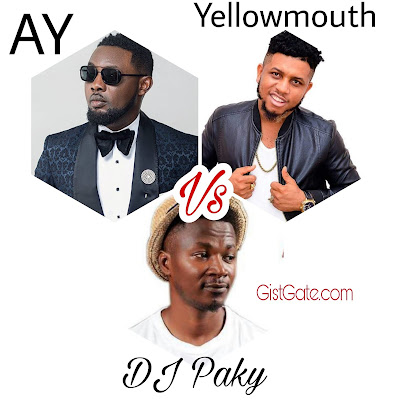 Following the AY not paying Upcoming Artistes saga that has rocked the Imo state entertainment scene, following the GistGate.com interview with DJ Paky, the DJ has come out to clear the air about his relationship with AY in the whole saga.

Packy played at AY Live Owerri on 29th December 2017, last week he told GistGate that the event makers never paid him but rather insulted him and said they can't pay Upcoming Artistes that performed at AY Live. This led to an ongoing social media trend #UpcomingArtiste that has been championed humourously​ by Anaturuchi GreenBrain on Facebook with crazy memes.

Today, DJ Paky took to Facebook to tell the world that he had no direct business with AY and thus AY isn't owing him. He said he did the work out of friendship with Yellowmouth, a co-organiser of AY Live Owerri and they had no written agreement for payment but he hoped he will be compensated after the event... A hope that never materialized. His statement:

I wish to set the records straights regarding the issue trending online about the past AY Live Show in Owerri.

Please I never called out AY for any reason as I did not do a direct business with him.

The Genesis of the whole thing is that I was called by our MC Yellowmouth who approached me to perform in the show and i agreed, there was no written agreement or terms reached on that, it was just a verbal communication.
After the event I was made to understand that there's no financial reward for upcoming artiste. Which I relayed the information to those who worked with me & to IMO state based artiste association, I showed them the text I received to clear doubts let it not be that I did not appreciate anybody or I made millions & decided to eat alone.

A lot has been said and I don't want to go into any of them at the moment because I was obviously misunderstood and misquoted in some of the blogs & social media publications.

I also repeat, I have no issues with AY & I don't have problem with anyone, It's a brand new year for AY and I will still work for him with my heart..

We have a lot to achieve.

Let's get to work in one mind and good spirit.
Thanks.