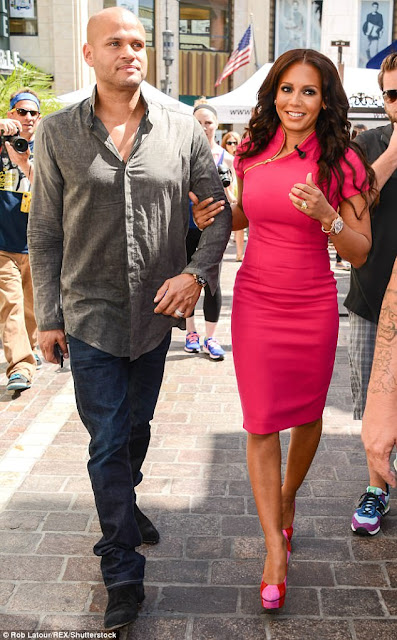 Mel B who was among the international music group Spice Girls is said to be left with only that small amount in the bank. The revelation is surfacing as she and her husband Stephen Belafonte are currently fighting dirty in court over money and who keeps their one child.
And in another shocking twist to the Mel B and Stephen Belafonte divorce battle, it was claimed the
Mel's British account Moneyspider Productions, which was set up in 1997, holds the small amount of funds, as revealed by The Sunday People.
DailyMail report has it that the nature of business is listed as 'Sound recording and music publishing activities'

A source told the Mirror: 'Mel is an international superstar, still working as a judge on America’s Got Talent, but she only has a small amount of money in the bank, according to Companies House.

'People may be very surprised.'

Mel also owns 20% of Spice Girls Limited which held £109,987 as of August 31, 2016. Her fellow bandmates own the remainder.
She owns 16% of Octopus Direct along with the other Spice Girls and music mogul Simon Fuller.
It held £10,549 as of August 31, 2016.
The singer's money woes were revealed when she attended court in Los Angeles on Friday for the first time to face Stephen, who she says subjected her to years of physical and mental abuse.
The pair both have outstanding tax debts after making 'improvident' lifestyle choices, Los Angeles Superior Court was told.
She was revealed to be making between £147, 000 and £150,000 a month.
Belafonte, who claims his income is zero, is asking for backdated wages of around £90,000, an estimated £1,729 in perks, around £54,000 in spousal support and more than £150,000 to pay for his ongoing legal costs.
His lawyer, Grace Jamra, asked Judge Lawrence Riff to order the sale of the couple's Los Angeles home if necessary. It is currently on the market for just over £6 million.
She said: 'Their lifestyle was extravagant and affluent.
'She wiped out all her Spice Girls money, approximately $50 million (£38 million) if not more'
In exclusive DailyMail.com pictures Mel looked confident as she strode into the downtown LA court building in black pants, a white shirt, lace tie and a pair of trendy black shades.
Flanked by her legal reps, the pop star stayed quiet as she entered the building.
The former couple, who were married for 10 years, are battling over money and custody of their child.
She filed for divorce on March 20, citing 'irreconcilable differences'.
Mel  earlier obtained a temporary restraining order against Belafonte accusing him of mental and physical abuse, taking millions of dollars from her and forcing her into threesome sex, in explosive court papers.
The TV presenter also described how she was once so desperate she took an overdose.
And she also accuses her husband of having an affair with their nanny Lorraine Gilles which resulted in the woman becoming pregnant.
She said in the filing earlier this year: 'I have tried to leave the Respondent many times. Every time I tried, the Respondent threatened me with violence and threatened to destroy my life in every way.'
Stephen has denied the claims and said that he has been set up and made to look like a 'bad guy.'
Stephen, a producer, has claimed to be homeless, in debt and without income following the break-up of the marriage.