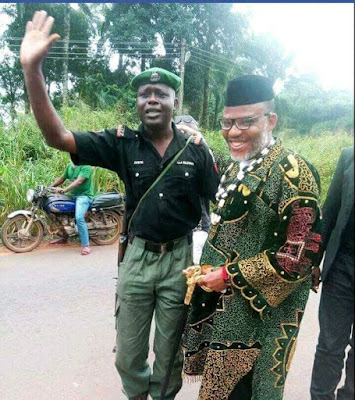 Editor's Note: This letter to Nnamdi Kanu was written by Modesty Ezenwa. I think it is very insightful. Enjoy.

" Listen brother KANU , I understand the frustration. I wish things can work that way. But everything that happens in the world has a precedent and there is something called international law. That's where the elites and intelligentsia are important for the struggle.

John Garange was elite of the South Sudan he was instrumental to the peace talk that led to independence of South Sudan. After he died in a plane crash, Silva Kiir, his lieutenant, who was also another elite, took over and led the country to Independence.

Our people should be very careful so that they do not shoot themselves in the foot. Things do not happen by emotions. The international law does not recognize emotions.

First and foremost Nigeria is an independent sovereign state, a member state of the UN, AU, Commonwealth of Nations and Ecowas. She has diplomatic relations with over 100 countries in the world. Her sovereignty is respected and protected under the UN law, it means that until she decides by herself to partitioned herself, no country in the world will recognize any part of Nigeria that forced itself out of Nigeria.

I give you an example of what will happen when the elite of Igboland do not engage Nigeria in discussions about self determination. By the way the 1999 constitution does not have any provisions for self determination of any part of the federation like the US or U.K. Constitution, for a debate or discussion to happen about letting a part to go the constitution which is the supreme law of the law must be amended or changed.

This is what will happen if you fail to act within the international law framework. You will become like entities such as Northern Cyprus which broke away from the south in 1974 with the support of Turkish Army; which after 42 years, no country in the world other than Turkey recognized.

The north Cyprus does not do business with any country in the world, they do not have international passport recognized by any country in the world, their citizens are given Turkish citizenship so that they can travel out. Their money is not recognized by world bank and they cannot trade with the outside world. But they have been existing on their own for 42 years now. Currently they are agitating for reunification with the South which is called Greek Cyprus.

This is a precedent to look at. Somaliland was colonized by Britain while Somalia was colonized by Italy. After independence, Somaliland willingly join their Somali brothers to become the republic of Somalia. When civil war broke out in Somalia about 25 years ago, Somaliland which was very peaceful and functioning, withdrew from the Somalia republic.

25 years after, even though Somalia is a failed state and Somaliland has been having peaceful democratic elections and functioning like a state, no country in the would recognized Somaliland as a country. Her citizens are still called Somali and can only travel outside with Republic of Somalia passport.

Somaliland is living on international aid because it cannot do business with any country in the world. Their money cannot exchange for international currencies because it's not recognized by world bank and IMF. This is a precedent in our own Africa.

The two breakaway regions of Georgia known as South Ossetia and Abkhazia are recognized only by Russia more than 10 years after they broke away from Republic of Georgia with Russian support. Till this day only Russia recognized them as a sovereign entity. No one does business with them. In order for them to travel out they took Russian citizenship and obtain Russian passports. But by international law they are still Georgians.

Ukraine conflict is still on till this day. The East broke out of the Ukraine with the help of Russia military. The war is still on. Even though for 3  years the Ukrainian government is not in control of those regions. No country in the world recognized those regions as independent or sovereign states. They are still using Ukrainian currency, Ukrainian passport and the territory is still know as Ukraine.

These are precedents. Don't tell me our own will be different, how? If we push this thing as idiots and unintelligent people, Nigeria will make us suffer like never before.

They will stop salaries and pensions coming to East Nigeria like Ukraine did to their East. They will put economic blockade on the East that you can't even ship your produces out nor bring importation in. They can make the life of the Eastern region living hell.

It takes a man who think with his head rather than his heart to know all these. It takes a person who employ reasoning rather than emotions to look for precedents. I still maintain that for things to run it course in accordance with international law only the elites and the intelligentsia can move it forward and engage Nigeria in meaningful discussion.

If Biafra will ever become an acceptable republic in the world and enjoy all the privileges as a sovereign nation, only Nigeria will grant her independence from the federation like the Ethiopia did to Eritrea, like Sudan did to South Sudan , like Serbia did to Montenegro.
"