OLUIGBO competition to fight against extinction of Igbo language - Founder

on June 26, 2017
The maiden edition of Oluigbo (Voice of Igbo) competition is going to be taking place on June 30th by 10am at Calvary International Secondary School at Orji in Owerri, Imo state and it is aimed at stirring up the youths to uphold the Igbo language and keep speaking it dearly no matter the rate of penetration   of western culture.
GistGate.com had a brief interview today with the founder of the initiative,  Mazi Nwadike Johnpaul to know what inspired this unique project which is aimed at encouraging and sustaining the Igbo language.  Enjoy


What inspired this Oluigbo Initiative?

OluIgbo was inspired by the rapid disinterest of many Igbo people to freely speak or interact with what they term as "vernacular", being a hokum self denigrating idea foisted on them by the so called civilization, hence, you have our language, Igbo language, gradually dying by instalments, at the expense of our cultural heritage. And that should worry anybody who claims to be Igbo and who claims to love Igbo. So, OluIgbo is a handy response, a sought of intervention to this anomaly, which we all pretend is OK. 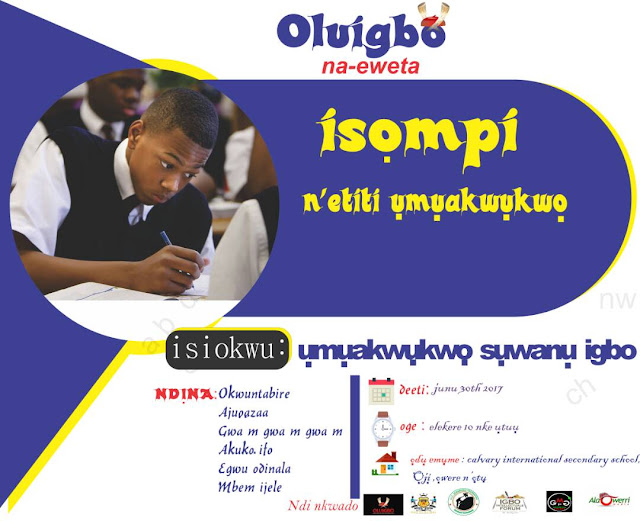 Who came up with this brilliant idea?

OLUIGBO was founded by me Nwadike Ifesinachi Johnpaul, alongside a team of efficient and vibrant youths... It was floated few years ago but has been more of an ideology other than a movement, hence, it was almost a muted mantra... But other pan Igbo bodies like Nku Di Na Mba fired our interest to make it a movement and initiate this program because of the potential achievement it promises. Nku Di Na Mba is a diasporic body with the same vision as OluIgbo which operates here on the home front. So, we are here for good and plan to do this annually.

Does Oluigbo have any impact on nation development?

How can other interested schools participate in this?
Well, so many persons have asked this same question. My answer is this, we are just testing the waters, we are doing a kind of test run with Calvary International Secondary School, Orji to be able to access its success and places where amendments are needed. We plan to make it an annual event, incorporating, not just other schools in Imo, but in the entire Southeast region and other Southern Igbo speaking states who may wish to participate. We pray to have a large sponsorship then, which is always a problem. But for now, we are grateful to those who in one way or the other, has put in their time and money and advice to make this program a success. So, very soon, we will get more schools to participate by God's grace.