I am the next Nigerian President - Ekiti State Governor Fayose 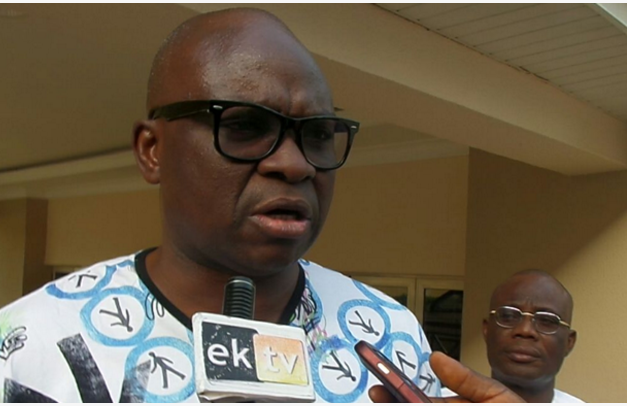 2019 is fast approaching and many eyes are set on the presidential seat. The controversial Governor of Ekiti State Nigeria, Ayo Fayose, has unofficially declared for presidency come 2019.
Yesterday, June 16th, the governor boasted that he has the penchant of taking over power from incumbents and come 2019, he will take away power from President Muhammadu Buhari.
Speaking to newsmen, he said he is the best man for the seat and Ekiti people are solidly with him.

“Just because Ayo Fayose has won a second term to become governor of Ekiti, some people also think they can come back now, but I want to tell them that it is not possible. I am the man wholeheartedly loved by Ekiti people because of the many developmental projects that have brought great infrastructural and developmental advancement to Ekiti.

“If you go around Ekiti, you will see my handiwork dotting every nook and cranny of the state. This is why I am the man who every Ekiti people will follow in 2018.”

Fayose said he had the penchant for taking powers from people having defeated two former governors (Niyi Adebayo and Fayemi) in governorship elections.

“I have penchant for taking powers; that one in
“I want to be the next president of Nigeria. My own won’t be this change that has brought nothing, we are going to represent the people well and tell them the truth.”
Buhari’s hand. I will take it. I’m going straight to that villa. I’m the next president.

The governor, a member of the Peoples Democratic Party, boasted that he had the attributes to wrestle power from the President Muhammadu Buhari-led All Progressives Congress in 2019.

He also boasted that former governors Segun Oni and Kayode Fayemi would fail if they contest the 2018 governorship election in the state.

According to him, neither of the two performed to an admirable level that Ekiti people would give them a second chance like he was given.

The governor spoke at a meeting with political office holders at the Government’s House, Ado Ekiti, where he also inspected Osoko Political Institute Centre.