What Crime Did I Commit - Former Imo State Governor Cries Out 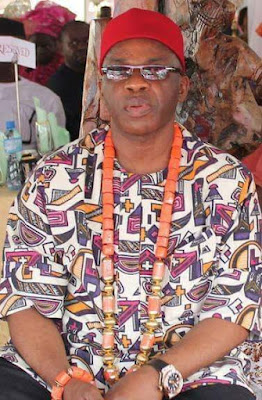 Yesterday, the former Imo state governor who is seeking for a second "One More Tenure" wrote on his Facebook page:

Do you understand the difference between being straightforward with the truth and being arrogant? Ask that same person when did Ikedi Ohakim insult him or when Ikedi Ohakim was arrogant to him and the person cannot tell you where and when such incident occurred. He will say I heard it from Mr A or Mr B. So you didn't even see it happen? Hearsay. Ask that person if Ikedi Ohakim insulted his father or mother or his brothers and sisters and he will not be able to tell you when and where such a thing happened. Another hearsay.

That's how they heard that Ohakim flogged a Reverend Father. Ask the person how Ikedi Ohakim failed him when he was Governor and their excuses would make you wonder their level of reasoning. What is Ikedi Ohakim's crime? I have refused to lie to you and tell you I can do the impossible knowing it is impossible and when you finally listened to the person who says he can do the impossible, like our youths will say, how market?

Our civil servants listened to all sorts of lies and blackmail against me and even formed groups with the sole purpose of removing the same Ohakim who promoted them twice, paid them overtime, paid their leave allowance, never cut their salaries and paid them on or before the 25th of every month without owing them so today I ask our civil servants, how market? Our pensioners listened to every lie told against Ikedi Ohakim, the same Ohakim who made sure they received their entitlements without any deductions so today I ask our retired fathers and mothers, how market? Our businessmen and women, how market? Political appointees how market? IMO economy how market?

Isn't it still obvious to those who choose to peddle lies and blackmail that the hardship of today is as a result of jettisoning our economic vision? Ikedi Ohakim was faced with herculean forces that battled me from within and outside the state yet I did not fail on anything I set out to do and those I could not do I will not promise you I would do them.

Any project I embarked on was properly planned and despite our shortage of resources we tried the best we could with what was available at the same time ensuring that the well-being of human beings remains more important than building structures that add no value to the well-being of the people of Imo State. What is my crime?

My crime today is that I speak out when things are going wrong in my state. If I keep quiet when the homes of sons and daughters of Imo State are destroyed within proper compensation I will be a good man to some people and nobody will cook up lies and blackmail against me.

If I keep quiet while the salaries of civil servants are cut and the entitlements of pensioners are cut nobody will insult or blackmail Ikedi Ohakim. All I need to do is remain silent to the suffering of our people and nobody will lie against Ikedi Ohakim or blackmail him like they did with the Reverend Father incident that brought us where we are today. What is Ikedi Ohakim's crime? Many people don't like people that tell them that bitter truth that is why many people do not grow and when you tell them that plain truth without sugarcoating it with lies to make it sweet to the ears, you are labeled arrogant, you are marked for blackmail. Who do you prefer, the person that is honest to you and tells you that bitter truth or the person that lies to you and deceives you with lies which will come to haunt you tomorrow? Your guess is probably as good as mine.

If I offended you, tell me, that's what I like because if you offend me I too will tell you. Tomorrow they will say Ohakim is wicked and arrogant because he says what is in his mind without trying to deceive you. To those whose job is to spread lies against people, if you don't change from your ways, God will certainly serve you with the same plate you serve others and believe you me, yours will be a thousand folds worse than what you do to others. Have a wonderful new week and God bless you