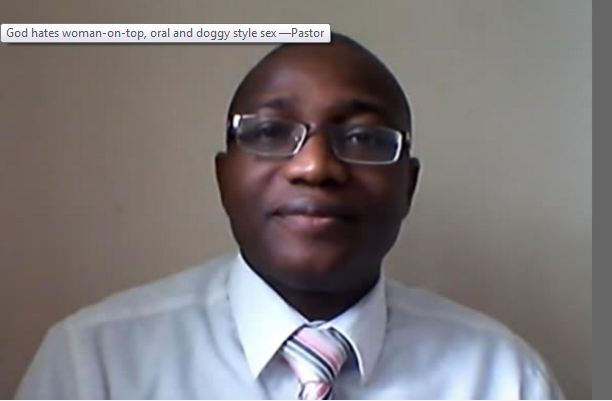 One Pastor Olugbenga Oladejo of the Complete In Christ Church, UK, has released a video to warn people on the types of cex that God dislikes.
In a video entitled, ‘Warnings to married Christian couples from the Lord Jesus Christ,’ Pastor  prophesied eternal punishment to men who allow their wives to mount them during cex, men who love the doggy style of cex; and worse, men who love oral cex!

“The Lord has made the man the head, not the woman.

“So, those men who enjoy their wives coming on top of them on their matrimonial bed, the Lord says they are not coming to heaven at all!

“The Lord said He made man the head, and so shall it be. You cannot change that ordinance.”

The pastor in the video also said women and men who engage in the doggy style will go to hell.

The fiery preacher thundered, “The Lord did not create you to behave like a dog on your matrimonial bed with your wife; or like a goat, or like a cow, or like a chicken.

“Those who do that are not going to make it to heaven.”

He said the “natural way” that God has made sex to be is for man to lie on top of the woman, and anything to the contrary risks divine chastisement.

Sexologists describe this “natural” style of sex act as the “missionary position.” It is the only natural way of having sex that God allows, according to Pastor Oladejo.

“I really didn’t want to share it with people, but the Lord laid it in my heart because He wants to use it to save the souls of His children who are on their way to hell,” Oladejo said.

Quoting from the book of prophet Isaiah chapter 33, verse 14, Oladejo narrated how the Lord showed him the vision of hell fire.

Quoting again from Isaiah 24: 5, he said the Lord informed him that His children commit immorality on their beds, changing the “ordinances of everlasting covenant” as God had ordained it.