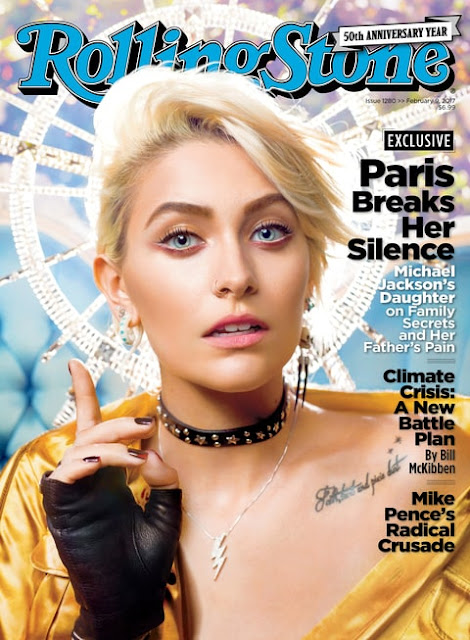 Michael Jackson's daughter, Paris, has granted her first ever interview and made some very cking revelations. She revealed how she was raped at 14 years by a stranger and how her father, pop king Michael "was murdered". She made the revelations in interview with RollingStone Magazine.
'He would drop hints about people being out to get him. And at some point he was like, 'They're gonna kill me one day','. The 18 year old Paris Jackson revealed.
'It's obvious. All arrows point to that. It sounds like a total conspiracy theory and it sounds like bullshit, but all real fans and everybody in the family knows it. It was a setup. It was bullshit.'
Paris went on to reveal that a total stranger assaulted her sexually 3 years after her dad died. SHe was only 11 years old when Michael died in 2009 leaving her in the custody of her grandmother because her mother had already lost her visitation right.


She said a 'much older complete stranger' sexually assaulted her when she was just 14.

Paris spiraled into the depths of depression and drug addiction.

The teen tried to commit suicide several times and managed to hide her self harm injuries from her family for years.

Her self harm only became evident in 2013 when she was hospitalized over a suicide attempt and it became public.

'It was just self-hatred... low self-esteem, thinking that I couldn't do anything right, not thinking I was worthy of living anymore,' she said.

Early 2000s: Paris and her brothers Prince and Blanket were rarely seen in public without face coverings.

2005: Jackson's daughter was left solely in her father's care after her mother Debbie Rowe surrendered her visitation rights.

2009: Paris was 11 when Michael died. She cried as she spoke at his public memorial saying he was 'the best father you could ever imagine'.

2012: Her grandmother Katherine Jackson temporarily lost her guardian rights after she went missing for a short time. Katherine's rights were renewed the following month.

Paris told Rolling Stone she was sexually assaulted by a complete stranger when she was 14 in 2012.

June 2013: She was hospitalized for a suicide attempt. Paris said she had been self harming for years and had made several attempts to take her life before this one incident became public.

She was also struggling with depression and drug addiction during this time until she went to a therapeutic school in Utah.

2015: She graduated high school and attempted community college before taking up a modeling career.
It's fun to comment and share. Drop yours!