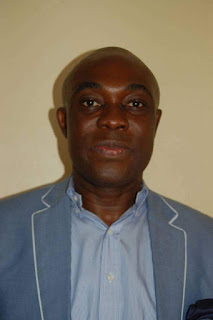 The Economic and Financial Crimes Commission had arrested the cousin of former Akwa-Ibom governor, Goodwill Akpabio, Mr
According to information by EFCC, the suspect was arrested in Rivers State over charges of N10,000,000 oil scam.


"EFCC ARRESTS AKPABIO'S COUSIN FOR N10MILLION SCAM. Operatives of the EFCC have arrested Ibanga Ime Akpabio, cousin to the former Akwa Ibom Governor, Godswill Akpabio for his involvement in a N10, 000,000.00( Ten Million Naira)  oil scam. He was arrested in Port Harcourt, Rivers State.
Akpabio's arrest was occasioned by an allegation that he collected a sum of N10,000,000.00 from a potential investor in petroleum products. Specifically, Akpabio reportedly approached the investor to invest the money as equity in the purchase of petroleum product directly from a floating station belonging to the Nigerian National Petroleum Corporation, NNPC. He allegedly assured the inventor that he had secured all necessary approvals for the running of the business.
He allegedly collected the money through a Diamond Account being operated by Fastej Enterprises and neither neither kept faith with the business arrangements with the investor nor returned his money to him. He is urgently undergoing interrogation in the Port Harcourt's Zonal office of the EFCC.

"The attention of the Economic and Financial Crimes Commission has been drawn to a recorded audio conversation attached to a report with the caption, EFCC Detains Brother of Former Akwa Ibom State Governor Ibanga Akpabio, which appeared today, November 2, 2016 on the online news portal, Sahara reporters allegedly featuring two Akwa Ibom politicians, Ibanga Akpabio and a certain Osong.
In the said audio recording, a voice purporting to be Akpabio could be heard dropping the names of some security chiefs including the acting Chairman of the Commission, Ibrahim Magu and boasting about the supposed EFCC boss’ willingness to help deal with his purported political adversaries in Akwa Ibom state, especially a certain Robinson Uwak.
The Commission wishes to state that the claims in this tape especially as it affects Mr. Magu are patently false. The EFCC boss has never met Ibanga Akpabio all his life and could not have been party to any violent scheme to settle unknown political scores in Akwa Ibom State. Indeed, if Magu were Akpabio’s Man-Friday as he would have his ‘friend’ believe, he would not today be a suspect answering to charges of fraud before the Commission.
Members of the public are therefore enjoined to disregard the recorded conversation as plain braggadocio."

By Anaturuchi Green July 13, 2017
BISCUIT BONE vs BRISKET  BONE; the correct one goes to.... I understand this is trending on social media that "It is brisket bone not biscuit bone"  and almost everyone including many graduates and educated  people see it as correct. But it is a wrong "correction".
2 comments
Read More

By Anaturuchi Green August 10, 2017
A large animal needs a large tool. The elephant really has it. Observers even claim that the elephant can use his penis to support himself where his feet might not be able to do so. He can also use the large penis to chase of insects from areas where the nose can't get to. Now you know!  Daily Nigerian News, African News, World News, Celebrity Gists, Fashion, Lifestyle, and Entertainment on GistGate.com Let's Chat on FACEBOOK or INSTAGRAM
126 comments
Read More

By Anaturuchi Green May 09, 2015
18 year old lady, Adrianne from Michigan is set to break the record for the longest tongue in the world with her 4 inch long tongue. She can can touch her nose, chin, elbow and even eyes with her tongue. See more pics below.
63 comments
Read More