Nnamdi Kanu wants FG to pay him $800 million for damages, says IPOB is registered in 30 countries 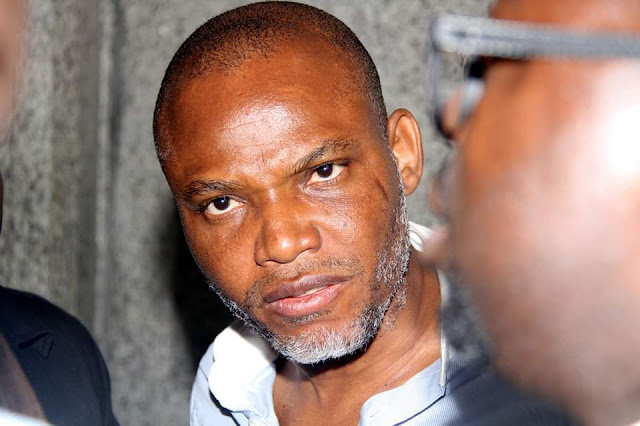 The leader of Indigenous People Of  Biafra and founder of Radio Biafra who have been in detention since last year has taken his case to the ECOWAS court, seeking for his release and also for the Federal government to pay him $800 Million for damages. He has also said that IPOB is registered in 30 countries.
Nnamdi Kanu, has filed a suit to the Community Court of Justice of the Economic Community of West African States, ECOWAS, to compel the Federal Government of Nigeria to pay him monetary compensation of $800 million for what he described as the gross violation of his human rights in his detention by the Nigerian Department of State Services.


According to Vanguard report, Kanu, who has been in detention since October 14, 2015, admitted before the court that he was the founder of IPOB, a body he said was duly registered in over 30 countries of the world. He further told the court that Radio Biafra Limited was duly registered under the United Kingdom Companies Act, 2006, and certified by the Registrar of Companies for England and Wales.

According to the document before the court, IPOB was registered under the United Kingdom Companies Act 2006, with certificate registration number 9141882. Kanu told the court that he came to Nigeria to visit his parents as well to join his heavily-pregnant wife, who, he said, was expected to give birth through caesarean operation in the UK.

More so, Kanu told the regional court that his legs and hands were chained by operatives of the Department of State Services, DSS, while he was in their detention facility, a treatment he said “amounts to the worst dehumanisation, degrading treatment and torture.” Cited as defendants in the suit marked ECW/CCJ/APP/06/16, which Kanu filed through his lawyer Mr. Ifeanyi Ejiofor, are the Federal Republic of Nigeria, Attorney General of the Federation and Minister of Justice, and the Director General, Department of State Services, DSS.

The plaintiff told the ECOWAS court that he is not facing any terrorism charge before any municipal court of competent jurisdiction in Nigeria or elsewhere. Aside praying the ECOWAS court to order his release from detention, Kanu also wants “an order directing the defendants and/or their agents individually and/or collectively to pay $800 million to the plaintiff for the gross violation of his human rights, the subject matter of this suit, and to provide other forms of reparation, which may take the form of restitution, satisfaction or guarantees of non-repetition, and other forms of reparation that the honourable court may deem fit to grant.”

Thanks for reading. Please add you comments below. We love and appreciate comments!!!