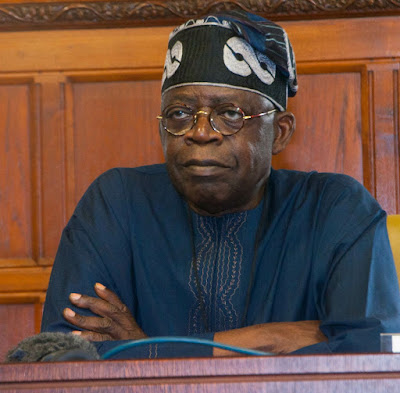 President Muhammadu Buhari on Monday congratulated the national leader of the All Progressives Congress, Asiwaju Bola Tinubu, who clocks 64 years on Tuesday.
In a statement by his Special Adviser on Media and Publicity, Mr. Femi Adesina, the President expressed the belief that Tinubu’s rise politically since he was elected as a Senator in 1992 was a testimony to his forthrightness, diligence and doggedness.
He observed that the same qualities had endeared Tinubu to the electorate and given him all-round success as a private sector worker, a businessman and two-term Governor of Lagos State.
The President noted that the party leader’s disposition led to the formation of the APC which was able to oust the Peoples Democratic Party within a short period of its formation.
The statement read in part, “As one of the pillars of the APC, President Buhari commends the visionary leadership style of the Asiwaju of Lagos, who is also the Jagaban of the Borgu Kingdom in Niger State, for creating a formidable opposition party in Nigeria that worked vigorously within a short period to oust a party that had been in power for 16 years.
“The President assures the national leader that his patriotism and commitment to democracy and good governance, and his generous spirit will always be remembered and appreciated by generations of Nigerians.
“He prays that the Almighty God will grant the Asiwaju long life, good health, wisdom and prosperity as he steadfastly supports efforts to promote the development of Nigeria.”