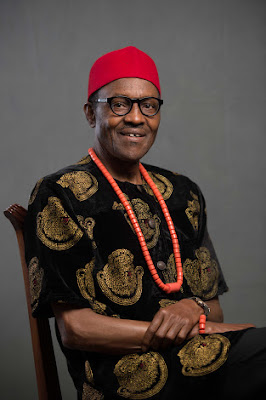 It was gathered that Mr. Mani has already been replaced by Bashir Abubakar, who, until his appointment was an assistant director in the Bayelsa state command of the SSS but the presidency has yet to officially announce the development.
Mr Femi Adesina who is the president's special adviser on media said all questions about it should be directed to the DSS as he does not speak on security.

It was learnt that Mr. Mani has since been redeployed to the Ebonyi state command of the SSS.
Close sources said that the president ordered Mr. Mani removed following repeated complaints that he was blocking people with genuine appointments from having access to the President.
“He was becoming excessively overzealous and overbearing,” one source said.
Mr. Mani first angered Mr. Buhari when he engaged the president’s aide-de-camp, Mohammed Abubakar, in what appeared to be a power struggle.

Mr. Abubakar, a Lieutenant Colonel, had issued a memo ordering personnel of the State Security Service out of inner Aso Rock and restricting them to guarding the “outer perimeter” of the presidential villa, saying personnel of the Armed Forces and the police, trained as Presidential Body Guards (PBGs), are to “provide close/immediate protection for Mr. President henceforth”.

Mr. Abubakar said SSS operatives should steer clear of areas such as “Admin Reception, Service Chiefs Gate, Residence Reception, Rear Resident, Resident Gate, Office Reception, C-In-C Control Office, ACADE Gate, C-IN-C Control Gate and Panama”.
“However, the personnel of the DSS in conjunction with other security forces are to man other duty beats/locations located within the immediate outer perimeter of the Presidential Villa,” he said, without providing reasons for the action.

But in a June 26 response to Mr. Abubakar, Mr. Mani, rejected the directive and gave a counter order asking his colleagues to disregard the spirit, intent and content of Mr. Abubakar’s circular.
Mr. Mani, who pointedly accused the ADC of grandstanding, overzealousness, limited knowledge and outright display of ignorance, insisted that Mr. Abubakar’s circular “grossly misrepresents” President Buhari’s directive.

He however did not say what the President’s exact directive is.