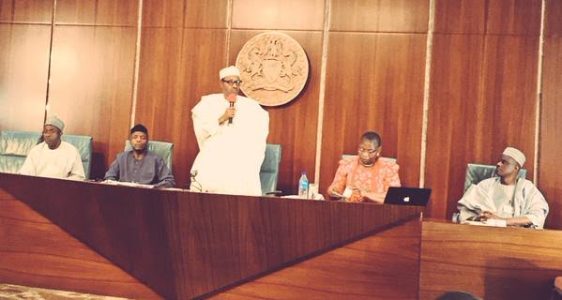 Yesterday, President Buhari, his vice Osibanjo and other top officials of government were host to the Bring Back Our Girls group leaders in Abuja. The BBOG led by former minister of education and the convener of the group, Mrs Oby Ezekwesili demanded that the government take the rescue of the abducted Chibok girls as top priority and that the FG should apologize to Nigerians for the failure to rescue the girls who have overstayed in the bondage of their captors.
While responding, President Buhari expressed his disappointment over the response that the Goodluck Jonathan led administration gave the matter, calling it unresponsive. He also said boko haram is not propagating Islam but acting in ignorance. He said they should change their name to something else.

The President said, “It is unfortunate that the security and Federal Government’s conflicting reports initially presented the government and its agencies in a very bad light both nationally and internationally.

“This is because the law enforcement agencies and the government were conflicting each other sometimes within hours or within weeks, that is not very impressive.

“I think you will agree with me that the present government takes the issue very seriously. Within a week of being sworn in, I visited Niger, Chad and would have visited Cameroon but for the invitation of the G-7 to go to Germany.

“I am very impressed with the fact that the leadership of this important group and the United Nations itself, are very concerned about the security in Nigeria which led to the abduction of the Chibok girls by the terrorists.

“When the terrorists announced their loyalty to ISIS, the whole attention again was brought squarely to Nigeria. And now we are rated with Afghanistan, Iraq and Syria. This is very unfortunate.”

The President also insisted that members of the Boko Haram sect could not claim to be propagating Islam, saying they should consider changing their name to something else.

“We are pleased that in the excesses of the terrorists, they have blown themselves.

“I think they have to change their names from Boko Haram to something else, because no religion will kill the innocents.

“You can’t go and kill innocent people and say ‘Allah Akbar!’ It is either you don’t believe it or you don’t know what you are saying.

“So, it has nothing to do with religion; they are just terrorists and Nigeria will mobilise against all of them,” he added.

The President said he was still compiling the shopping list requested from him by the G-7 leaders.

While saying that the military had submitted its own list, Buhari said he was still waiting for the governors of the frontline states who he had told to compile the list of infrastructure lost to insurgency such as roads, schools, markets and places of worship.

One of the leaders of the group, Dr. Oby Ezekwesili, told the President that one of their major demands from the government was the immediate rescue of the Chibok girls.

Ezekwesili, a former Minister of Education, said the abducted girls had stayed far beyond the acceptable period in the hands of terrorists.

She said the government needed to apologise for the failure that led to the girls’ abduction and its inability to rescue them.

Ezekwesili also called on the Federal Government to set up a commission of inquiry for accountability on the abduction and rescue of the girls.

While calling for the adoption of the identification, verification and reintegration of abducted citizens’ strategy, Ezekwesili also called for the creation of what she called National Missing Persons Bureau for the country.

She also called on Buhari to release the report of the presidential fact-finding committee that was set up by the Jonathan’s administration in the wake of the abduction.

Another leader of the group, Mariam Uwais, said they would not relent in their demand for the rescue of the girls.

The Chairman of the Kibaku Area Development Association, Dauda Illiya, asked the President to fulfill this promise by treating the safe return of the girls as a top priority.

He also pleaded with Buhari to visit Chibok within the first 100 days of this administration “to have a firsthand view of the plight of our people, while we look forward to the safe return of our daughters very soon.”

Two parents of the abducted girls wept as they addressed Buhari in Hausa.