PHOTOS from Solange Knowles Wedding to Ferguson... Beyonce and Jayz still happy together 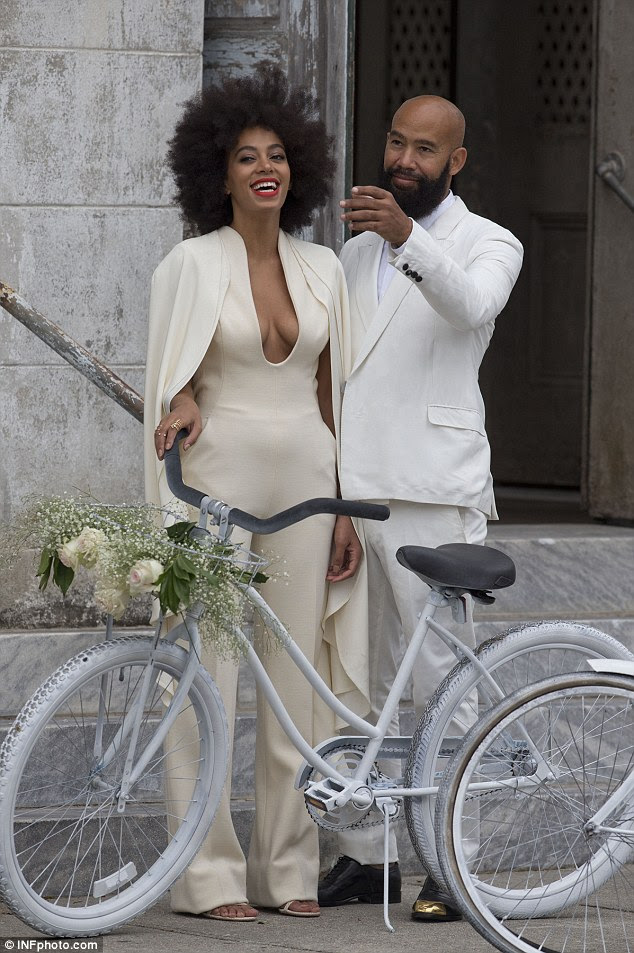 Beyonce's sister, Solange Knowles tied the knot with her longtime love Alan Ferguson on Sunday in front of about 100 close friends and family which included Beyoncé, Jay Z and Blue Ivy Carter at a church in New Orleans.
The guests, including Bey and her family, all sported shades of white. The singer and Blue Ivy wore dresses, while Jay Z sported a white suit. The couple beamed as they took photos after the ceremony, while mom Tina Knowles was spotted holding hands with her boyfriend. More photos after cut...


Before the wedding, Solange and her beau were spotted riding bicycles, during which several residents congratulated them on their upcoming nuptials.
Solange's son, Julez, from her previous marriage to Daniel Smith, played a big part of the couple's special day as well.
The singer first sparked the news that she was engaged after posting a photo on Instagram of her and Ferguson swimming in an ocean and embracing while on vacation for her birthday. Although they've been continually barraged by rumours of a marriage crisis over the last year.
But Beyonce and Jay Z looked more in love than ever on Sunday as they partied the night away in New Orleans to celebrate her sister Solange's nuptials to longtime love Alan Ferguson.

Ferguson is an American music video director who has worked with Katy Perry, Fall Out Boy, Gym Class Heroes, Nelly Fertado, and, of course, Beyoncé and Jay Z.
Drop comments and stand a chance of winning prizes weekly. Tell others about this site. Like Our FaceBook Page
Reactions: Posted by Anaturuchi Green
ENTERTAINMENT ShowBiz