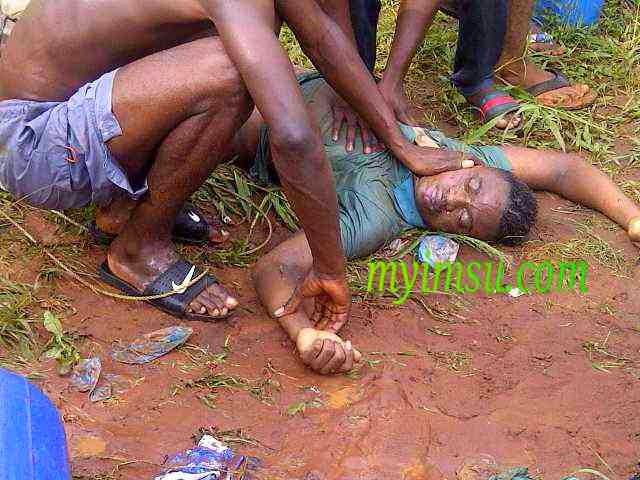 Report reaching myimsu.com from Bishop's Court area has it that the student pictured above died yesterday during what I term "Graduation Craze". The student is said to be among those who were catching fun by pouring assorted mixtures of liquids on final year students who wrote their last papers yesterday, Tuesday 25th November, 2014.
According to eyewitness account the young man who was a tenant in Blackberry Hostel, Bishop's Court, was partaking in the pouring of water and other liquids and the running about that was part of it. The deceased is said to have fallen into a ditch and by the time he was brought out he had died.
The informant who goes by the name Dr. Frank said:
" We were celebrating our final year students by pouring them water, so as we were running around he fell inside a pit full of dirty water (sewage) but didn't cover his head because is a small hole but (because) he was asthmatic before we could draw him out he was dead already".
Dr Frank who resides in the same hostel as the deceased (Blackberry hostel, Bishop's Court) also made it known that the corpse of the deceased whose name he said was Chisom also known as "Afor Ukwa" was yesterday deposited at Aladimma mortuary from where it was taken to Ihiala, his hometown.
The dead student was still pursuing his BSc. and was not among the graduating students who were being so called "celebrated".
I will investigate to get more info on this.

Meanwhile, I guess it's about time this rubbish stops. If it is just clean water, it would be understandable but the idea of bathing people with all sort of nonsense mixtures, sand, red oil, gutter water, urine, egg, garbage etc is something else. An exalted madness perhaps. It's so crude and barbaric.
Last year, there was news that acid was poured on someone all in the name of celebration.
Am just speaking my mind though. What do you think?