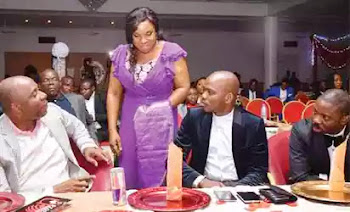 LEGENDARY Nollywood actress-turned-Evangelist, Rev. Liz Benson-Ameye and celebrated film maker, Jeta Amata who have been missing in action for some years now, returned to the social scene last Thursday night at the sixth edition of Best of Nollywood Awards which held inside the Banquet Hall of Government House, Port Harcourt, Rivers state.

Liz Benson, started acting from childhood and her first break out role was in the soar away 1994 movie, “Glamour Girls.” She disappeared from the screen several years after she remarried her Bishop Great Emeya husband. But to the surprise of many, the ageless actress reappeared at the awards night amid fun fare.
Benson who clad in purple-colour gown was one of the veteran actors honoured with the Life-time Achievement Awards for their immense contribution to the development of the nation’s motion picture industry at the event. Others were film makers, Oga Bello, legendary Kannywood actor, Kasimu Yaro and Nobert Young.

Also, making a surprise appearance at the event was the celebrated director, and producer of the controversial film, “Black Gold”, Jeta Amata who has been missing in action in recent times.
Reactions: Posted by Princess Amarachi O.
ENTERTAINMENT EVENTS NEWS